You created a faction?
Here it is where to announce it

You see a fire in the distance... Your curiosity gets the better of you as you decide to get closer. The previous campers apparently left in a hurry, because this meat is still roasting over the flames.. You walk towards the smell of roasted sqoyote as you hear the sounds of several guns being cocked..

"HANDS UP WASTER!!" The voice comes from behind you.

You slowly turn around and see 5 men and a woman pointing their guns at your head. They seem to be assessing you for any tangible threats.

"He's clear..." The man who spoke had a stern and determined look in his eyes.

"My apologies for the cold welcome traveler, surely you understand we keep a wary eye about for any danger. This area is infested with all manners of sadistic and sick raiders and fiends.."

"Come sit by the fire and let me tell you a story."

"My name is Rha. I am Elder and Sovereign of the Brotherhood of Steel." An  order of knights tasked with finding pre-war technology and to uphold justice and order in the new world; to protect mankind from itself."

"A few months ago, I was a Paladin, leading a scouting mission into unknown territory."

"Ancient data was decrypted by the many scientists in our order and we discovered the location of a pre-war bunker, possibly holding many technological marvels from the old world. I assembled my squad and went to the War-Room for intel and briefing. We were ordered to recover any technological artifacts and to neutralize any threats in the bunker as well as assessing the possibilty of turning the bunker into an outpost."

"After making our way there, we found the place was deserted. No security systems were operational. It almost seemed too easy. Upon entering the bunker we found out the power was down."

"An hour passed until we were able to restore power and in that time we managed to find a terminal that was still operational.  Luckily, one of the squad members was a scribe who spent most of his life behind a terminal studying all the knowledge we gathered on the science of the old world. He was growing tired of being stuck behind a screen and applied for field duty, eager to experience the wasteland for himself. After hacking into the classified files, the scribe explained this bunker was used by the U.S. government for experiments with particle accelerators. They actually succeeded in creating a portal to another dimension!! We made our way to the bottom level when we reached a corridor leading to the portal room, only to find the portal was still open. Perhaps restoring the power is what triggered it. It was a beautiful thing to behold traveler, a shimmering hole within reality itself. A gateway into the unknown."

He stops cold and stares into your eyes, seemingly to make you understand the gravity of his words as he recites something that he holds close to his heart. These words have great meaning to him.

"The old world science may have destroyed the world, but we will use it to restore mankind to its former glory."

Rha sighs before resuming, revealing a more friendly and almost weary side to his stark counterpart of a hardened leader and combat veteran. "As me and my squad were reveling in the beauty of the ethereal we were suddenly interrupted. We heard a loud thump from behind us.. And another, and another... Footsteps it seemed, but different. A feeling of dread filled my heart as I noticed the sounds were growing louder and increasing in multitude. Then it hit me straight to the chest. A laser bolt coming from the corridor we initially came from. A massive swarm of robots was flooding through the corridor intent on exterminating us! I had no choice.. We were outnumbered and outgunned. The only exit was cut off, so I ordered my squad to jump through the portal as I took a stand. Some of them managed to jump through. Sadly we lost some of our brothers that day."

The fire cricked and crackled as the general mood upon the group became heavy with the past. "When I finally jumped through the portal, I fell into oblivion. There was nothing...eventually I found myself in a strange desert environment without weapons or power armor. All I had was some dogtags around my neck, but even my memory was lost to me.."

"I wandered the wasteland for several days. Trying to survive the harsh and unforgiving desert was the hardest thing I had ever went through. Being starved as I was, I ill-advisedly  decided to eat some mushrooms I had found. After half an hour, I had realized these were not ordinary mushrooms. Slowly I felt my mind slipping away into euphoric nothingness. As I became one with the vast nothingness, I could see myself laying in the sand as I started to ascend, higher and higher until I could see the earth itself staring back at me.."

"Suddenly I started falling as my mind exploded with a rush of euphoria and terror."

"Faster and faster until I crashed into the desert floor, I started to panic as the sand around me seemed to be coming to life. Swallowing me into a warm embrace–A pleasant embrace, cradling me and comforting me as I felt a cold burn on my chest. I opened my eyes as I looked down. My...holotag? Suddenly it all came back to me! My memories returned to me. A feeling of loss filled me as I was reminded of those who died in that bunker. I swore a solemn vow that night, to myself and to our order that I would continue our cause in these strange and foreign wastelands by establishing a new chapter of the Brotherhood of Steel. The Omega Chapter."

"A shining beacon of hope in this unforgiving desert."

"Since then we have been able to establish 3 different Brotherhood factions.."

"You seem to be a capable sort of person with a special set of skills. We are always looking for able people, smart or strong, fast or tough. With their moral compass pointing north. Willing to learn and to fight for a just cause."

Rha extends out his palm.
"Take my hand and join us to help restore order in this wicked wasteland!"

And in a beautiful unison the rest of the camp roars. 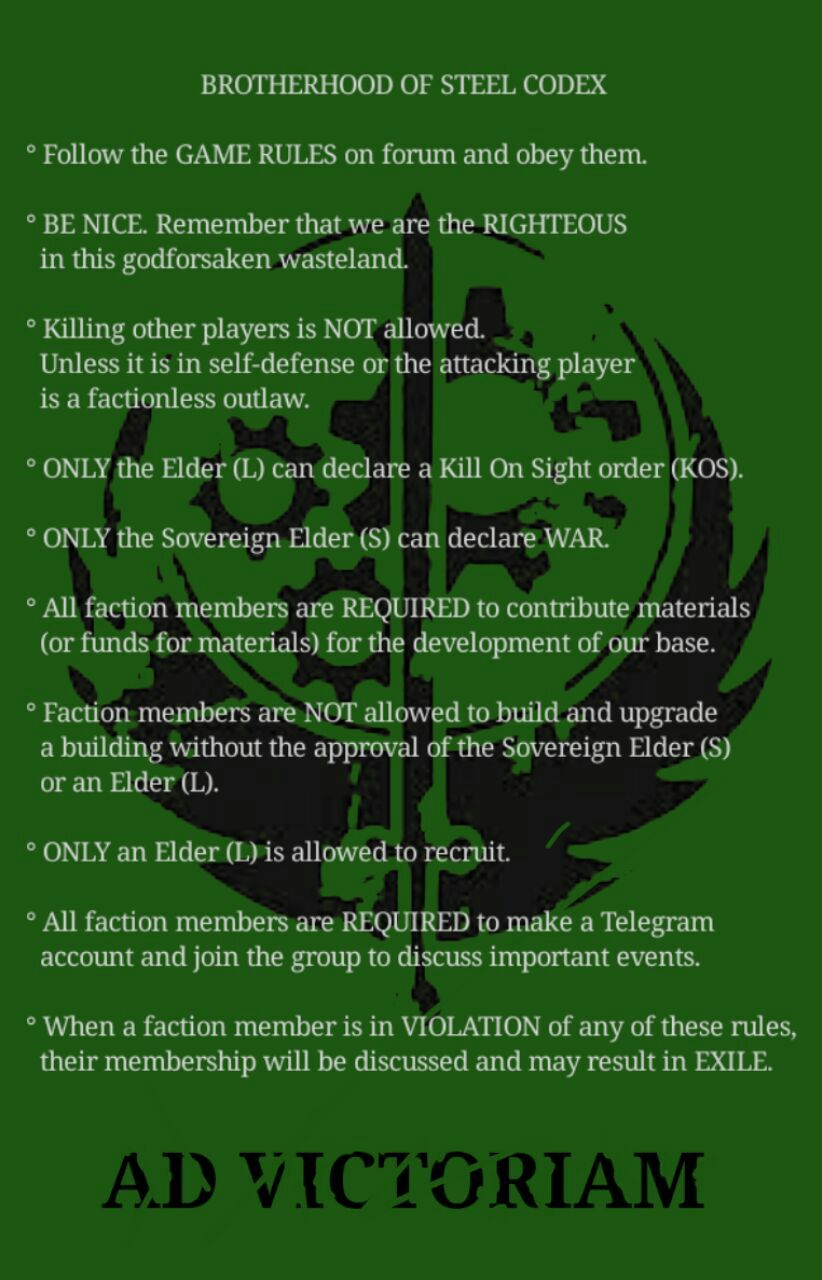 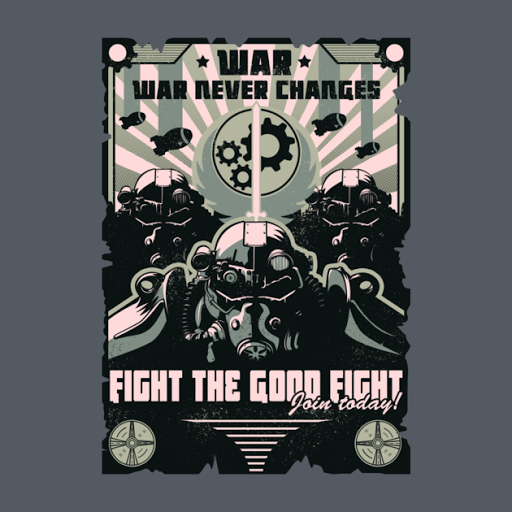 Elder and sovereign of the Brotherhood of Steel
Top


I suggest he stops attacking me.
The Deadflag Blues

The part about one of the members having done that is going to be dealt by the Sovereign and eventually the due apologises and/or compensations are going to be discussed privately between both sides.

What im more worried about is the following part...

I've received proofs showing you were claiming a mobs area for yourself, wich isnt allowed (see Rule nr.9), so let me use this occasion to let all players know about this guideline:

It's forbidden to claim a exping area for oneself. All players are to refrain from doing that as i will have to intervene and warp away all the ppl arguing about that and if choosing to ignore more than once this, it will result in kick from server for several minutes by the hands of GM's.
Generally, players are TO SHARE THE EXP AREAS if there happens to be more than 1 person wanting to exp at one spot another person is at and its FORBIDDEN to spawn block if this situation of area sharing is to happen.

(And btw if you want to continue the discussion, please open a new topic in the appropriate section and not in the recruiting part of the forum, or discuss it via pm on forum with the Sovereign of BoS, thanks


I suggest he stops attacking me.

"I am not being hostile towards him or any member of BoS."

The screenshot even shows you admitted to killing my member because she was taking "your spawns"....

Not to mention the fact ive seen a video clearly showing you attacked her first....
Elder and sovereign of the Brotherhood of Steel
Top

Please make an appropriate topic new post in faction section about this, instead of discussing it in the faction recruiting listing/post, thanks.
Aegis :: Retired Senior Game Master (SGM)
Languages: English, Italian, German

Pretty new and small, message me if you want to be a part of something bigger than yourself.
"Quis custodiet ipsos custodes"
Top
Post Reply
12 posts

Users browsing this forum: No registered users and 0 guests